On this page you will find all the information you need on our brand new, unique jetty. All your questions answered here!

Can I jetty jump?

Whyalla’s spectacular new jetty is a showpiece for the city that has attracted global attention since its opening two weeks ago. The jetty’s balustrades ensure the public are safe when using the facility as it was designed – for walking and fishing – but the safety of those choosing to jump from the jetty is at serious risk. Whyalla City Council and Whyalla Police are therefore working together to educate the community on the potentially fatal dangers of jetty jumping.

This signage indicates jumping is not allowed. The public is reminded the new jetty is 1.5m higher than the old jetty and with the changing tides, the water can become quite shallow, so jumping from the jetty has the potential to cause serious injury or death. 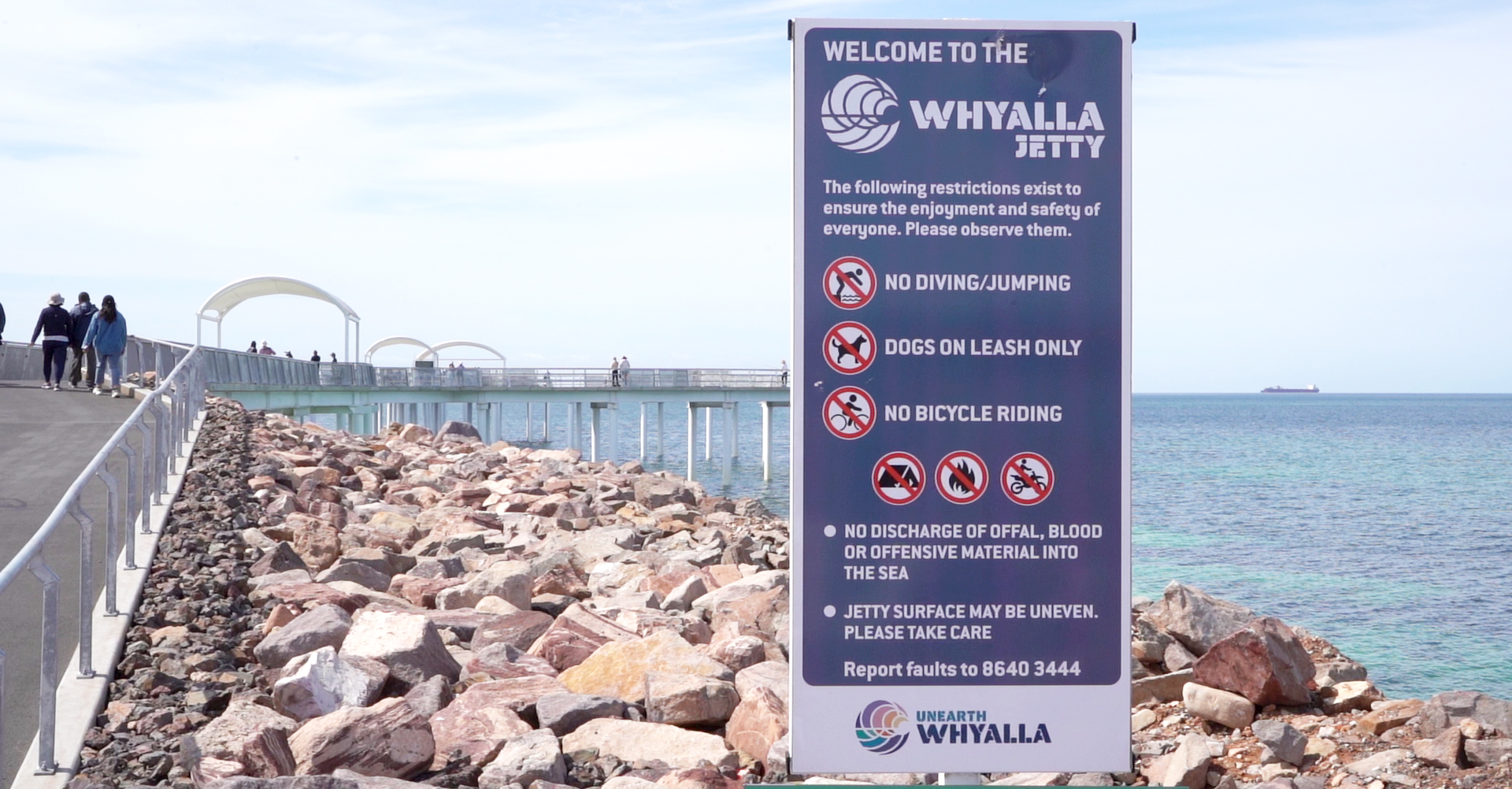 Whyalla Mayor Clare McLaughlin and Inspector Mark Hubbard talk about the dangers and the potential consequences of jetty jumping.

How long is the jetty?

The new jetty is 165m long, 38m longer than the old one. However, the circumference of the loop is a further 150m of walking distance.
So, in total our jetty is approximately 315m long.  The old jetty was 122m long. 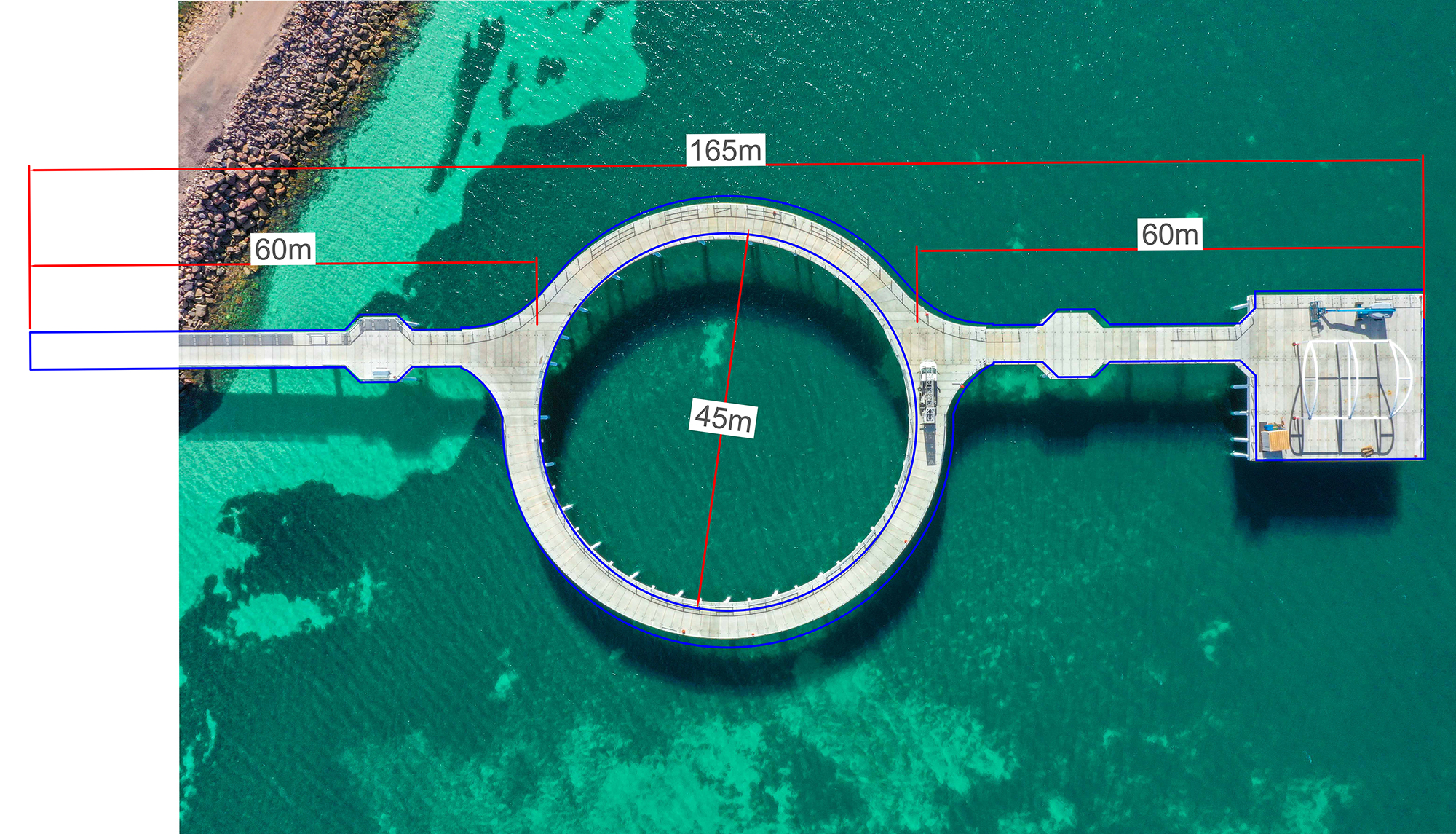 How wide is the jetty?

How high is the jetty?

The new jetty is 1.5m higher than the old jetty.

Why is there a circle in the jetty?

Council undertook extensive consultation with five jetty design options considered.
This uniquely shaped jetty was overwhelmingly popular and was chosen by the community as the preferred option.
The circle was popular because it was a real point of difference.

How much did it cost?

The budget for this jetty design was $7.8 million dollars. The State Government has contributed $1.0 million and GFG has donated $300k of steel.
Council is contributing the remaining $6.5 million. The jetty build remains on time and on budget.

Absolutely, this has been a key design requirement right from the start.
A 45m access ramp is being built to Australia standards and is still under construction.
We have allowed for open sections of jetty for children and people in wheelchairs to admire the view.
Also, there are 6 locations around the exterior of the jetty that have sliding sleeves on the top handrail sections for children or the disabled to fish from. 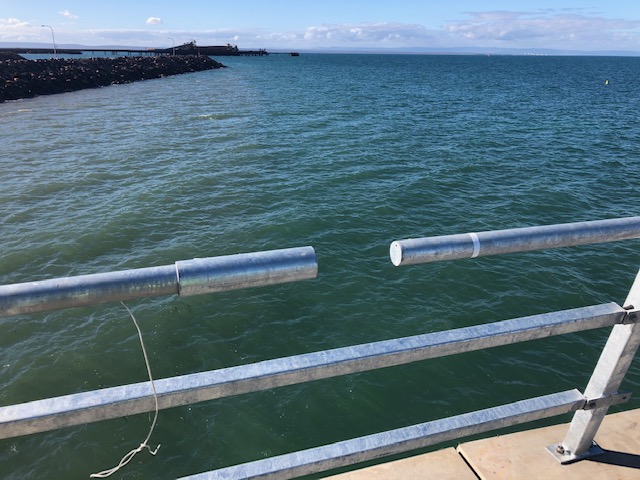 The new jetty is supported by 102 pylons which were driven into the seabed.
The old jetty had 11 pylons. 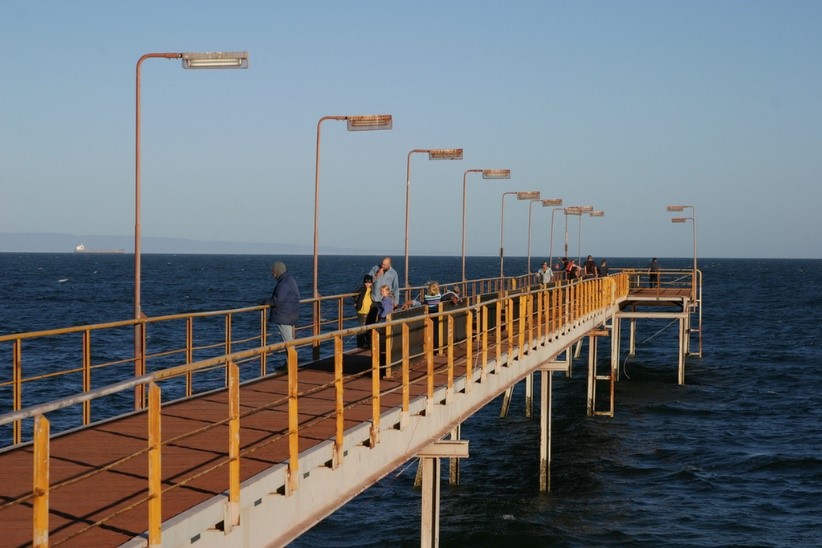 Will there be a ladder down to the water?

There are no ladders or steps.
Public safety is provided by the balustrade and there will be signage advising not to jump from the jetty.
Please remember the water is shallow and the new jetty is 1.5m higher.

What if someone has a medical episode on the jetty?

Emergency vehicles will be able to drive to the end of the jetty for patient retrieval.

What’s the jetty made of?

The new jetty is made of industrial strength pre-cast concrete slabs that is suitable for marine environments.
We also chose to use a reinforcement made from a high strength fibre rather than steel which helps to reduce the possible rusting components that are highly susceptible to the marine environment.
This is how our jetty achieves its 80-year life.
This new jetty will not suffer from concrete cancer.
The sides of the jetty are a combination of steel mesh to act as a wind break, and open sections for kids and disabled viewing and fishing areas. The entire jetty has brushed steel balustrade.
The old jetty had handrails only with open sections along its entire length. Is the centre loop going to be a swimming enclosure?

Council carefully considered making the centre loop a swimming enclosure however the additional cost of netting and on-going maintenance was considered too high a cost.
This is a fishing and walking jetty. There is a dedicated swimming enclosure inside the marina which you walk past on your way to the jetty. Our jetty has bespoke lighting installed inside the top handrail.
Each 500mm of handrail has a 50mm LED pod around the entire length of interior and exterior balustrade.
The old jetty had old school overhead lighting.
The new jetty has a state- of-the-art sleek modern look. 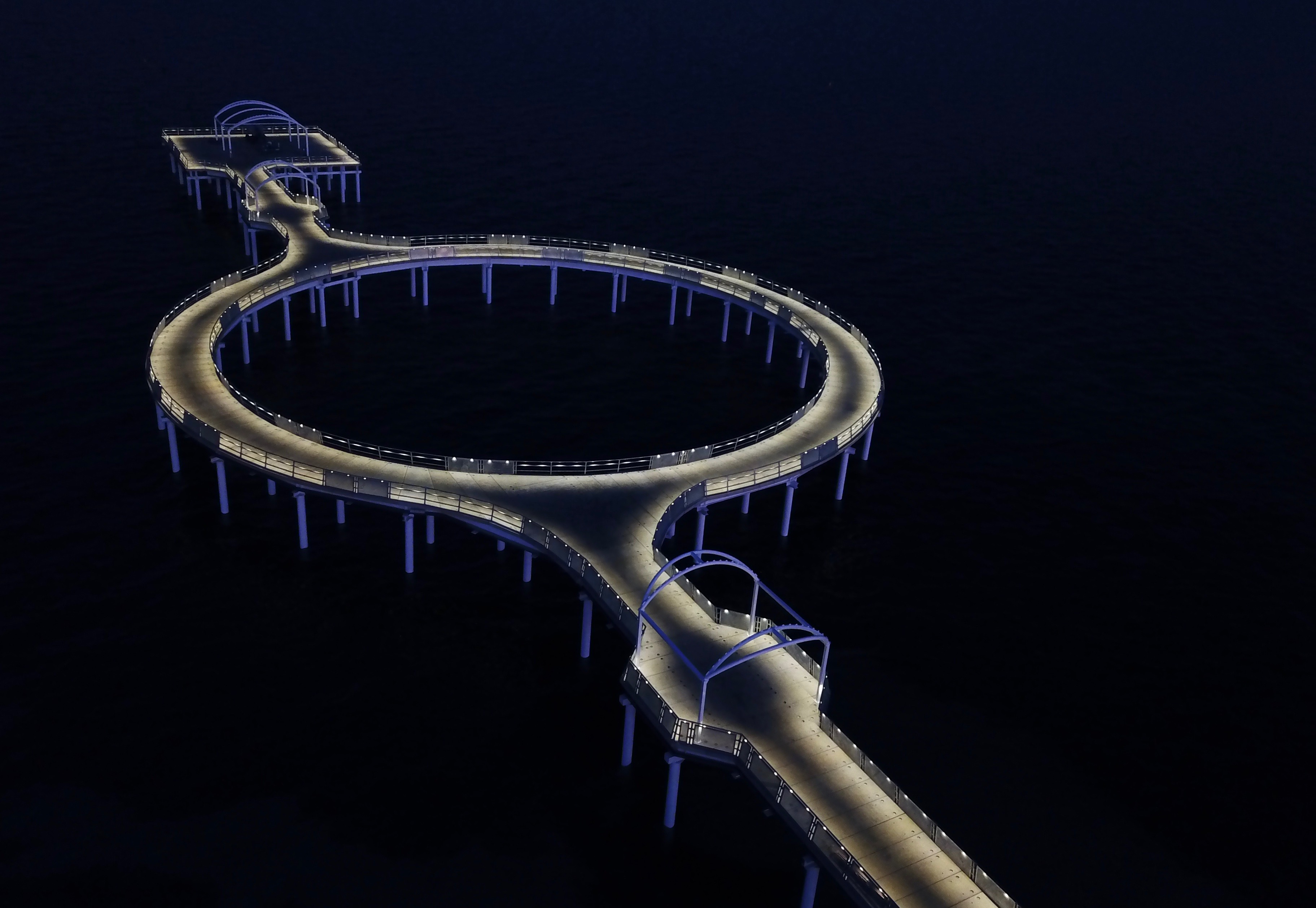 Will there be shelter?

There will be 3 shade shelters.
See artist’s impression below for an indication of what the shelters may look like. 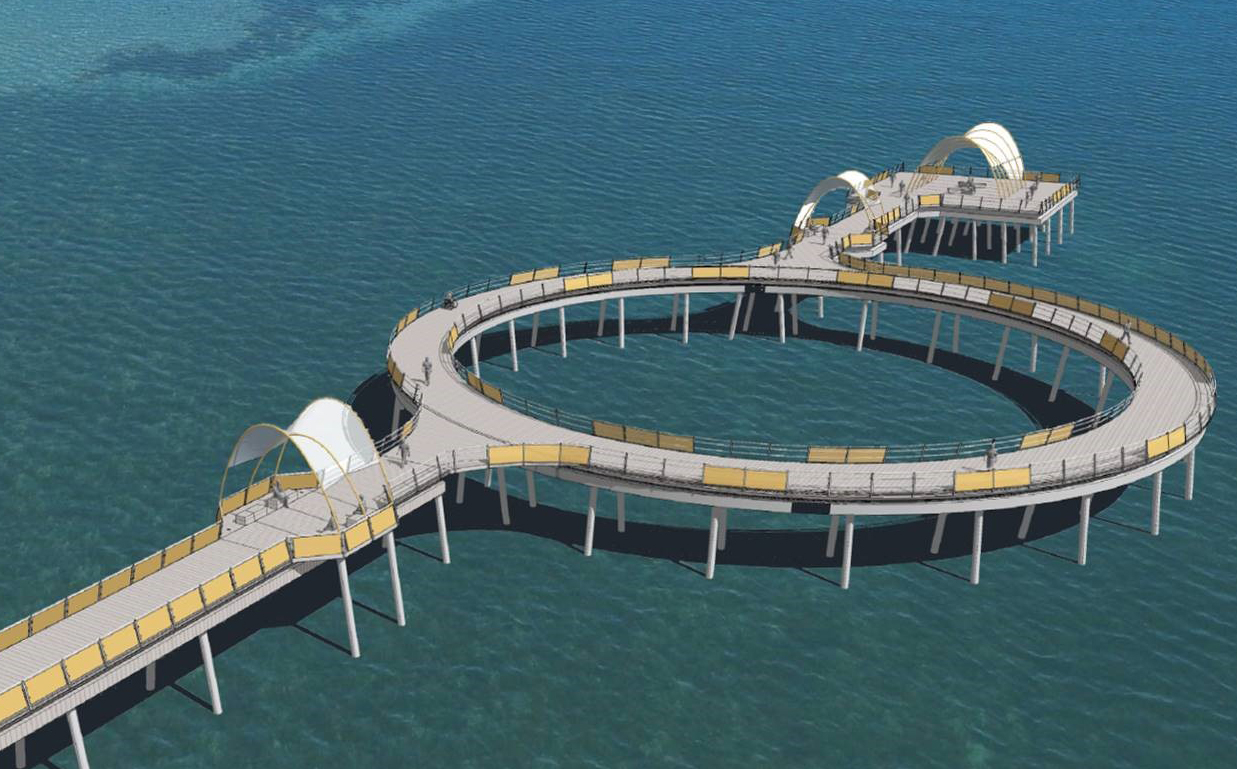 Where did the steel come from?

All the steel used on the jetty comes from our local supplier GFG. Except for the pylons since GFG do not manufacture round tubes.
The steel from the old jetty was recycled back through GFG’s blast furnace.

Our jetty has bespoke lighting installed inside the top handrail. Each 500mm of handrail has a 50mm LED pod around the entire length of interior and exterior balustrade.
The old jetty had old school overhead lighting.
The new jetty has a state- of-the-art sleek modern look.