In 1941, the first ship built in the new BHP shipyards, the corvette HMAS Whyalla, was launched. The blast furnace became operational and BHP began making shells for the war effort. Hummock Hill was fortified with the installation of four 3.7 inch heavy anti-aircraft and coastal defence guns, supported by a shipping identification signalling position. By 1943, Whyalla's population had soared to more than 5,000. The same year, a new police station, court house and technical school were built and opened. Until now, Whyalla was a company town and all services had been provided by BHP, but the residents were starting to give serious thought to how the town was being run. A public meeting was held in 1943 to discuss local government.

On 31 March 1944, an important event occurred in the town's history - the Morgan to Whyalla pipeline was opened. The ready availability of water now enabled industry and the population to grow at an ever-increasing rate. The following year on May 9, the newly formed Town Commission held its first meeting. Consisting of three elected members, three BHP appointed members and a government appointment Chairman Charles Ryan, the Commission provided Whyalla's first form of local government. 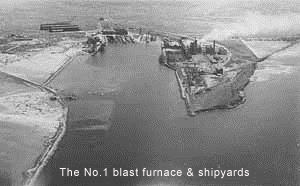 The end of the war in 1945 was to bring yet more change to the fledgling town. BHP no longer needed to build naval ships and started building commercial vessels. The war had left large numbers of refugees in Europe and the Australian Government had adopted a policy of increasing skilled migration to Australia. The first group of displaced persons' from Europe arrived in Whyalla in 1948. They moved for many reasons, but were generally coming for a new life.

The 15 years from the end of the war until 1960 saw many of the town's facilities being built and community organisations start up. The Pacific Open Air Cinema, Memorial Oval, a new airport, Whyalla West School, Trades Hall, cycling velodrome and the CWA Hall were all opened during these years. The Whyalla Garden Society, Whyalla Music Club, Whyalla Rostrum Club, Whyalla Rotary Club, Whyalla Apex Club, Whyalla Players, Whyalla Surf Lifesaving Club, Northern Naturalists, and YMCA were formed. Whyalla had also "arrived" socially, with visits by the Duke and Duchess of Gloucester, and Queen Elizabeth ll and Duke of Edinburgh.