On 4 July 1970 the Corporation of the City of Whyalla came into being and now, fifty years later, Whyalla Council is marking this significant milestone with month-long celebrations.

Until 1945 the Broken Hill Proprietary Co Ltd carried out all the functions of local government including town planning and development, and the provision of public utilities.

With enormous wartime growth of population, it became desirable that an independent form of local government be established and on 14 December 1944, the Whyalla Town Commission Act became law and the township achieved civic independence on 1 May 1945 with the establishment of the Commission.

Whyalla was proclaimed a provincial city on 19 October 1961.

Consequently, legislation was passed by Parliament to give effect to this recommendation, and an election for a Mayor and eight Councillors was to be held on 4 July 1970, when Whyalla became the Corporation of the City of Whyalla.

As Council celebrates fifty years, our Councillors sat down to reflect on this significant milestone.

From July – December 2020 there will be exhibitions located in the foyer of the Council Civic Building, and the Whyalla Public Library.

While the Whyalla City Council was being formed, what else was happening in Whyalla, in South Australia and in the world?

These displays offer a captivating stroll back in time and are a great social summary of a different era.

From Monday 13 – Saturday 18 July a temporary Museum will pop up at Westlands Shopping Centre.

Council is inviting residents to contribute items that represent a strong connection with the last fifty years in Whyalla, these items will then be redisplayed within the Temporary Museum as art works and cultural objects.

Items could include personal memorabilia, photos, films, an old gate, a brick, trinkets, glasses – pretty much anything that has a special significance will be considered.

It’s important to note that a Temporary Museum is not a junk space or second-hand shop, but a carefully curated space displaying a series of works as one would in a normal museum set up.

Objects will be hung, placed on stands and the floor with accompanying tags that state the title, year and provenance of the piece, along with the name of the resident.

This is not a static display as the collection of works will grow over the duration of the project on site with unearthed treasures added as they are received.

By generating a unique place of engagement and exchange within the community, the Temporary Museum aims to link the history of objects to the history of the people as it offers and reveals a series of unique values, interests and personal cultural perspectives on the area.

Concurrently, a series of video interviews will be made with residents, collecting the stories that accompany these objects and then screened through our giant camera.

An official exhibition celebration with the Mayor and Councillors will be held on Saturday 18th July from 10:00am until 1:00 pm. 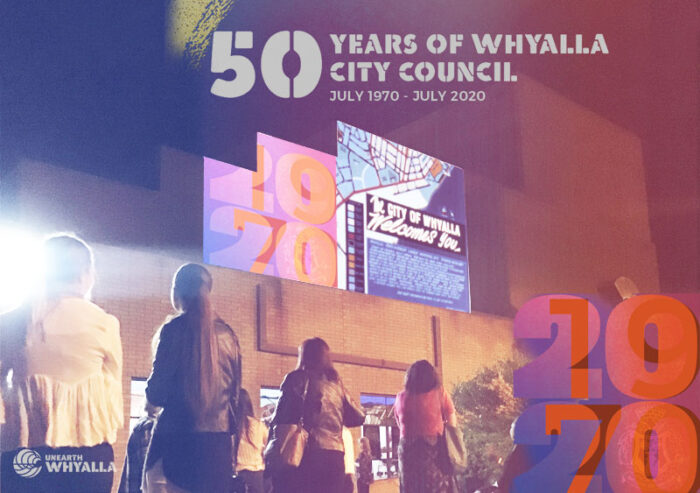 On Friday 31 July from 6:30pm-9:00pm there will be an Illuminart projection onto the exterior wall of the Middleback Theatre.

As part of the fiftieth anniversary celebrations, Council are asking people to throw open their photo albums and take a walk down memory lane.

Do you remember the waterslide that used to be at the foreshore?  The long summer days spent at the outdoor swimming pool?  Were you present when the first ship was launched at the Whyalla shipyards – maybe you even helped build it?

Well, here is an opportunity to re-live those experiences and more, to unearth your images of Whyalla and share them with the wider community.

We are seeking photos that represent a strong connection with the last fifty years in Whyalla and are looking for Whyalla-related images dated anytime between 1970 and 2020.

The images will be gathered into collections, uploaded onto our websites and shared on social media during the month of July.

They will also become a part of the final projection piece put together by the Council and illuminart being held on Friday 31 July on the Middleback Arts Centre outdoor wall.

Your photos and memories could be viewed larger than life as part of this outdoor projection experience.

Now’s the time to dust off the old albums, share your memories and be a part of this exciting community project.

Over the month of July Council is asking for your help to celebrate and share your history with us.

Everyone is invited to contribute a photo of something that represents a strong connection with the last 50 years in Whyalla, which will feature in our celebrations.

Some examples of the photos to look for could be; foreshore/beach/marina, outdoor swimming pool, the slide located near the Foreshore, Fauna Park, parks, library, historical buildings, city centre, all things with a link to Whyalla. These can be dated anywhere between 1970 and 2020.